One thing I don’t like…and many things I love

All I am going to say about this ‘thing I don’t like’ is: Oxfam – you need to have less annoying people working for you.
So on to better and more lovely things in life. Here is a quick/short list of things I love:
The sun
Warmth
People singing out loud to their iPod while walking their dog in the sun/warmth
My friends
My family
My new found appreciation of PB&J
Cute children saying cute things
My new txt-language word GOL (Giggle Out Loud)
The addition of chocolate to main meals
The fact that my only legitimate blog follower (besides my mother) is getting married in 10 weeks and 2 days
The All Blacks
The Irish
Laughing at awkward moments
That’s all for now.
Off to meet the old sister for a bit of dinner (at a restaurant/bar that may not exist…should be interesting).
Posted by Jo at 10:56 PM No comments:

Once upon a time...I went to Paris

This blog is called food travel life, yet so far I have sufficiently avoided the travel section. This is all about to change with a look back in time...a time when I went to Paris (*say it in French accent to reinforce its coolness*).

As an Au Pair to a wonderful family in the USA I got to experience a lot of amazing things. And when the question "would you like to come to Paris with us" was posed to me, my un-hesitated, yet slightly shocked response was, "yes please". And then on November 24, 2009 I left Washington, DC for a Thanksgiving vacation of a life time (especially due to the fact that this was in fact, the first Thanksgiving of my lifetime).

Now, I don't mean to gloat...but THIS is where we stayed.
And my days looked a little something like this:
Wake up in my room 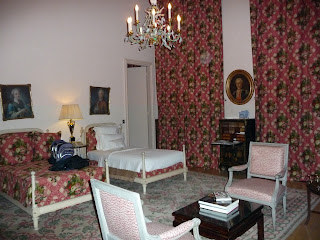 Go for a wander 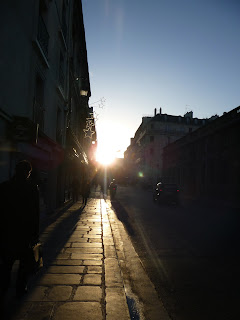 Breakfast delivered to my room 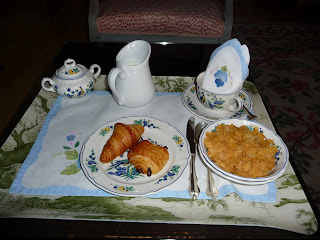 Go out with the fam 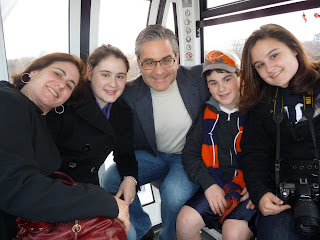 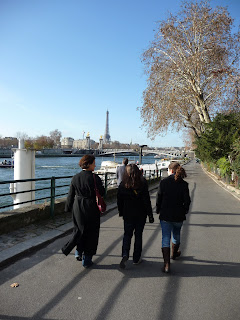 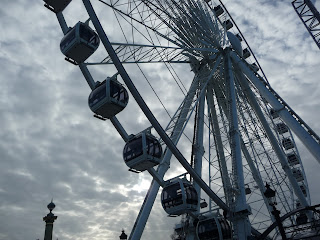 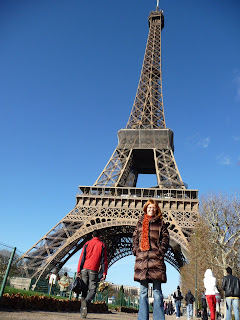 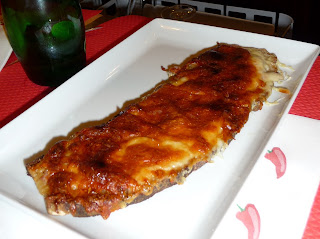 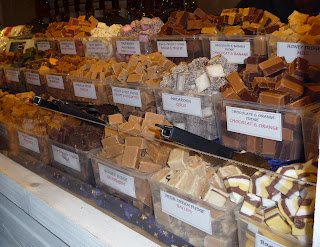 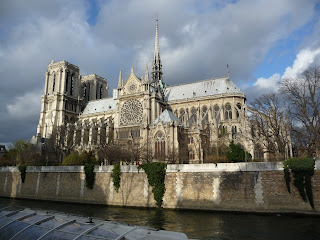 And then we go back ‘home’ and have amazing chefs prepare us dinner or we go out and eat soufflés for both dinner and dessert. 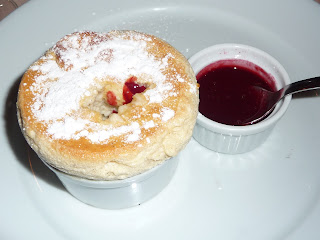 Last Friday was the beginning of the 2011 Rugby World Cup in little ol’ New Zealand. As a volunteer I had to be at Eden Park by 2:45pm (5 1/2 hours prior to Opening Ceremony), but due to circumstances in which I have absolutely no opinion (and if asked my reply would be a resounding "no comment", followed by an "that was off the record" just in case) I did not make it until 3:20pm. 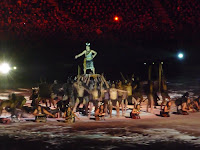 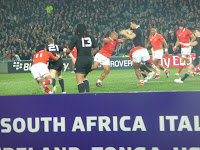 More photo's will be available on Facebook at some time in the forseeable future
Posted by Jo at 2:53 AM No comments:

If you can’t decide, make them both. And other news. 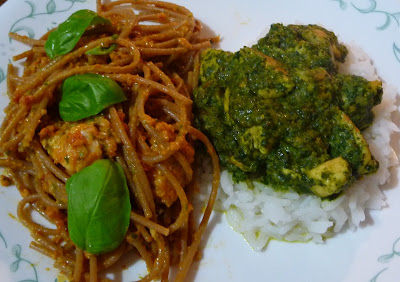 And in other [BREAKING] news, the Takapuna Beach Front Gelato Palour (not its official name) has done something spectacular…they have made what was the best gelato around, even better. They have gone from charging $4.50 for a one flavour one scoop (which was always their incredible lemon curd and yoghurt) to charging $4.50 for a two flavour one scoop (which allows the remarkably delicious licorice to be included).

It’s a Double Down kinda world out there

When I moved to the States 2½ years ago I knew I would be in for a bit of a culture shock. But I had prepared myself and felt confident that most revelations would cause little to be alarmed about…“they’re just different”, I’d tell myself.
When the Double Down was announced I thought I would have been horrified, but in fact, I was simply amused. Like I’d always said…different.
The KFC website describes the Double down as ‘two Original Recipe KFC pieces of boneless chicken with two pieces of bacon, two slices of Monterey Jack and pepper jack cheese and the Colonel’s sauce’. It sounded interestingly edible. 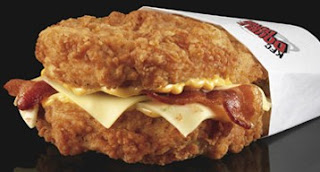 However, due to unforeseen circumstances I had to be leaving the USA before it was first sold in April 2010. It would seem that would have made no difference anyway, as just over a year later the Double Down found its way to New Zealand shores, yet for the 5 weeks it was here I did not partake in the purchasing or eating of one.
I’d seen a few friends with them and they never looked like the advertised version. At best, they looked something like… 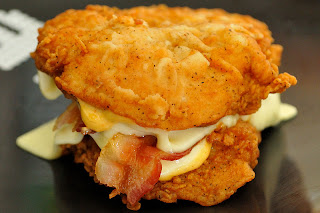 In the months following kiwi’s going gaga over this so called sandwich, I devised a plan to make it my own. I spent approximately five minutes drawing up a plan… 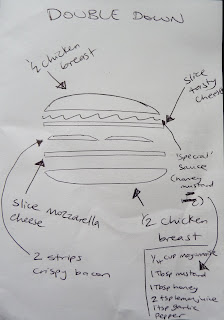 A simple and reasonably quick dish was then made. It goes a little something like this:
1.       Make sauce
Ø  Combine ¼ cup mayonnaise, 1 Tbsp Dijon mustard, 1 Tbsp honey, 2 tsp lemon juice, 1 clove crushed garlic and some pepper together) and set aside in fridge.
2.       Prepare chicken
Ø  Slice chicken breasts in half length ways.
Ø  Sprinkle a touch of salt, pepper, paprika, garlic powder and cayenne pepper on both sides of chicken pieces.
Ø  Dip chicken in a beaten egg.
Ø  Lightly coat chicken in flour.
3.       Prepare all other ingredients
Ø  Slice large thin pieces of mozzarella cheese.
Ø  Slice large thin pieces of tasty cheese.
Ø  Cook bacon strips between paper towels in microwave until crispy.
4.       Pour oil (rice bran, canola or similar) in a large pot to cover the base about ½ cm high and turn on heat to med-high.
5.       Cook the chicken until both sides are crispy and golden and it is cooked through.
6.       Place one half chicken breast on a plate, top with all the fillings (bacon, cheeses and honey mustard mayonnaise), and place other chicken breast half on top.
7.       Get a serviette at the ready, pick it up with your hands and eat. 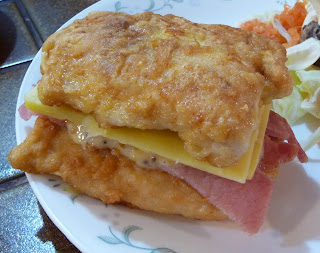 And yes, as always, there was still room for dessert.
Posted by Jo at 3:35 AM No comments: