Recipe of the Week

I realise that by calling this 'Recipe of the Week', you may presume it would suggest that there will be a recipe each week. But I can't promise that. And I won't promise that. It just sounded like something you would say if you are planning on relatively frequently sharing a new recipe.
Yea.
Good story Jo.
I would also just like to add that I am not an awesome blogger who takes photos of each cooking process...it's just one snapshot of the final plate.

Ok...so this recipe is called Crispy Chicken with Mole Sauce. It's cool cause it's chicken and chocolate. That's right my friends...chocolate for dinner.

Crispy Chicken with Mole Sauce
Ingredients
4 chicken pieces, skin-on
1½ tsp paprika
1 tsp ground coriander
4 Tbsp flour
1 red onion, thinly sliced
2 cloves garlic, crushed
2 coriander roots, chopped
1 tsp cumin
1 tsp fresh oregano, chopped
¼ tsp chilli powder
½ cup red wine
2x 400g cans tomatoes
15g dark chocolate, grated
Juice of 1 lime
Directions
1.       Put the chicken in a clean plastic bag, add the paprika, coriander and flour and shake to coat thoroughly.
2.       Heat some oil in a frying pan to over medium-high and fry the chicken until lightly golden.
3.       Transfer to a roasting dish and cook at 200○C for 25-30 minutes until crispy, golden and cooked through.
4.       Meanwhile, heat some oil in a frying pan over medium, add the onion, garlic, coriander, cumin, oregano and chilli and cook until onion softens, about 5 minutes.
5.       Add the red wine and reduce until sticky.
6.       Add tomatoes and cook until the sauce has reduced by half.
7.       Pour sauce into a food processor and blend until an almost smooth consistency.
8.       While sauce is still hot, mix through the chocolate and lime juice.
9.       Place ¼ of the mole sauce on each plate and top with a piece of chicken. 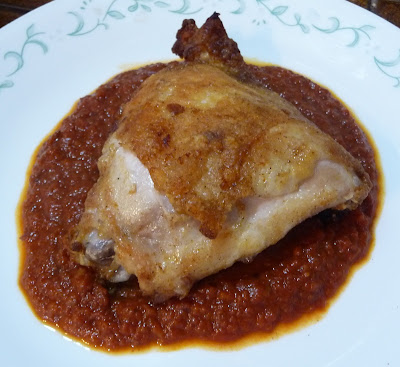 As mentioned in previous post, Gina’s is special. As if beautiful men weren't enough, yet the food is spectacular too.
Here is a run-down of the four times I have been to Gina’s.
#1 – I’m pretty sure I ate bruschetta, followed by pizza, and finished with a warm brownie cake with a gooey centre and deliciously cold ice cream. But, the details are fuzzy due to the unexpectedness of the whole evening. Read about that here.
#2 – Luckily, I basically had the exact same thing on this visit. For starters it was a mixed bruschetta. The toppings were all well thought out, well proportioned and well presented. It was well good. 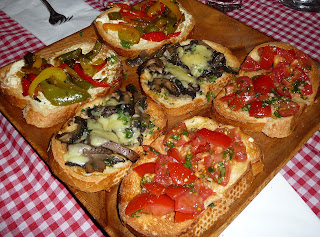 For main it was a case of sharing a couple of pizzas…
Bodo’s Speciale (Ham, salami, mushroom, capsicum and olives)
A thick fluffy crust with some reasonably nice toppings, makes for a reasonably nice pizza. 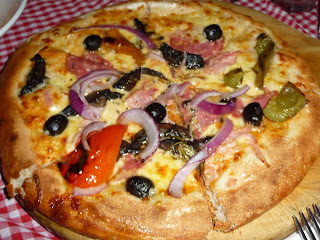 Alleluia (Roasted chicken, basil pesto and pinenuts)
There isn’t much that can go wrong with this combination. And that’s basically the end of the story…nothing much went wrong. The only thing I would wish for is slightly more topping going to the edge of the pizza. 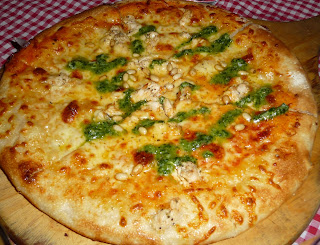 And then for dessert. The plan was for the whole table to get the cheesecake (as it came highly recommended). Unfortunately, due to 'unforeseen circumstances' (ie. popularity), it was unavailable. So I went back to my previous dessert of a warm chocolate cake with the gooey centre and ice cream on top. And yes, it really does taste as good as it looks. 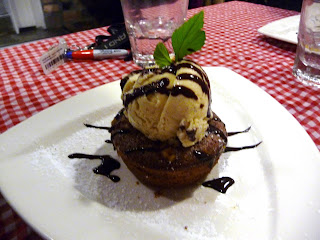 #3 – This visit was a little different. There was no pizza this time. Nor was my chocolate delight the dessert of choice. For starters we just had some warm breads and dips which, if I recall rightly, were lovely. Then for my main I went with Fettuccine Mari e Monti (Fettuccine with prawns, chicken and mushrooms in a tinted marsala cream sauce, roasted walnuts and truffle oil topped with pecorino cheese). The strong and intense flavours made this a truly wonderful dish. 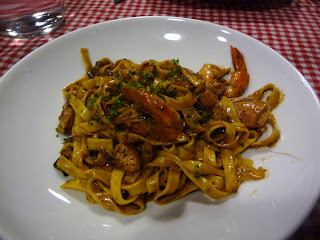 For dessert, seeing as I had missed out last time, I went for the cheesecake. Although it was nice, there was nothing exciting about it, so I ate it while happily dreaming about that gooey chocolate cake. 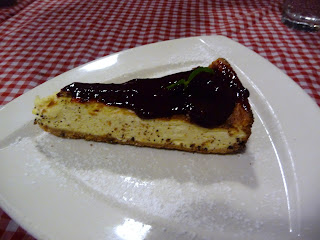 #4 – My most recent visit was, again, a little bit of food heaven. We stuck with our traditional mixed bruschetta and it was unanimous that it was the best so far. Perfectly crunchy bread and an abundance of toppings that had all been seasoned perfectly. I forgot to take a photo, but it looked just like the first photo I promise.
We chose three pizzas this time. We went for the Bodo’s Speciale and Alleluia again, and as you can see it would seem there is a new chef who has a much more rustic style. They were ridiculously good.

Now the third pizza was a little on the strange side. We had ordered the Massimo Grande (Roasted chicken, eggplant and sun-dried tomato)…mmmmm, I know. But what came out was the Ortolana (Roasted and chargrilled eggplant, capsicum, courgette and carrot)…that’s right, carrot on a pizza. It was weird. But it tasted fine and we didn’t bother complaining because, at the time, we didn’t actually remember what we had ordered in the first place. 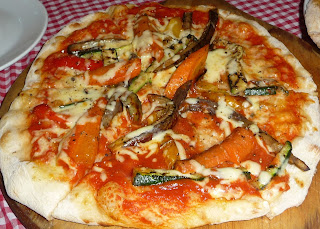 And then finally, my beautiful dessert was Tartin di Mela (Puff pastry spread with almond butter topped with sliced apples and caramelized sugar. Served with whipped cream and cinnamon)…it wasn’t quite what I was expecting, but it was definitely enjoyable and I would recommend it. Although, next time, I will be getting the gooey chocolate cake and ice cream goodness. 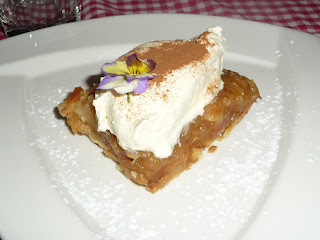 Four times within the last eleven months I have found myself dining in the glorious splendor that is Italy (in Auckland). Three of those times have been with four fabulous friends who know a good thing when they see it.

In the next blog I will talk about the delicious food...but on this occasion, I will go against my 'save-the-best-till-last' analogy, and inform you of their impeccable service...

Imagine with me, if you would, five young women sitting around a table more appropriately sized for that of a couple. They are there to celebrate a birthday and it’s all going well as rather attractive males with perfectly distinct Italian accents circle around smiling and laughing whilst menus are being perused. After making it through their entree and main courses they find themselves in that situation where fullness is obvious, but the sweet delights of the dessert menu are calling their names ever so loudly. It doesn't take a lot of convincing though, and dessert is on its way.

While chatting and laughing away, something catches their eye. Then, without warning, the lights have been dimmed, their central dining location has been exposed, and a half dozen shirtless Italian men come singing “Buon Compleanno” to the birthday girl. After a few kisses on the cheek (and, as the story goes, a sneaky one on the lips) any maturity this group had was sufficiently stripped away in their giggles of what was both joy and shock. Never had they expected what they received that night, and in conjunction with the discount coupon they had, it was definitely value for money.

So that's my story and I'm sticking to it. No visit has lived up to that first fateful night...but honestly, who’d expect it to?
Posted by Jo at 8:57 PM 2 comments: