That is definitely a made up word.
But in this age of combining words to make them…umm…combined, then I truly believe cinnamon and chocolate deserve that same respect.
Also, I’m writing this post for the monthly blogger event through We Should Cocoa, and I needed a name.
Basically Chocolate Log Blog and Chocolate Teapot came up with the idea of getting food bloggers to put up a recipe that has chocolate in it, along with the ‘special ingredient’ which a new blogger chooses each month.

If you’re one of my two consistent readers (hello) you may remember I did one of these six months back. And now it’s time for round 2.
The special ingredient for December is cinnamon.

I had two recipes that I wanted to use (chocolate and banana cake or jaffa slice)…but I figured it would be breaking the rules if I put them both up…so I went with the cake because it has been made multiple times (mostly by mother-dear), it’s pretty easy and has been exceptional every time.
Which is a fantastic combination.
Just like cinnalate.

Chocolate and Banana Cake
(I believe this is from an Annabelle Langbein book?)

Directions
1. Cream the butter and sugar until pale and fluffy.
2. Add the eggs, one at a time, and beat after each addition until well combined.
3. Stir in the mashed banana and vanilla essence.
4. Sift the flour, baking powder and baking soda together. Fold into the creamed mixture in three lots, alternating with the yoghurt.
5. Spoon half the cake mixture into a lined and greased 20cm cake tin.
6. Combine the chocolate chips, brown sugar and cinnamon together.
7. Sprinkle half this mixture over the prepared cake batter.
8. Spread the remaining batter on top and sprinkle with the remaining chocolate mixture.
9. Bake at 180C for about 45 minutes. 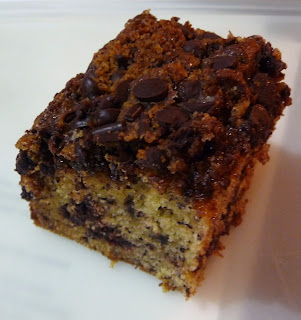